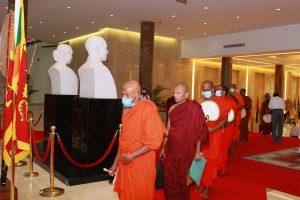 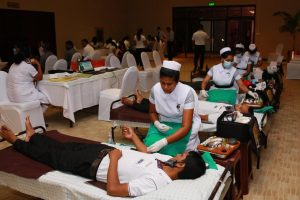 BMICH – Sri Lanka’s iconic landmark hosted its first exhibition since the lockdown signifying an important milestone in the “Restart Sri Lanka” journey. The Exhibition – Kedella Home maker Expo – held from 14th to 16th August 2020 attracted over 20,000 visitors on the three days signifying Sri Lanka’s return to the “new normalcy” and public confidence in the successful handling of the pandemic by the government and its agencies.

“BMICH, with the support of our partner for this event – Asia Exhibitions & Conventions, truly restarted Sri Lanka. It was a success beyond our expectations which is evident by the massive number of visitors that we received for the very first exhibition since the lockdown. It was especially a pleasure to see people visiting the exhibition with their families, entertaining and enjoying themselves in addition to visiting the exhibition stalls and shopping. We encourage one and all to visit the exhibitions in support of the country to restart the economy as there are a lot of people who benefits from it starting from the exhibitors their suppliers and 3rd parties as there is a cascading effect which reaches right down to the grass roots” he added.

With the successful hosting of the first exhibition and the high level of public as well as exhibitor confidence experienced, BMICH will be hosting exhibitions every weekend in the future amidst strict health safety practices. 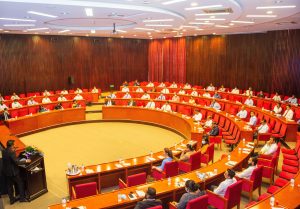 Leadership Forum by SLIM being held at Jasmine.

BMICH – Sri Lanka’s iconic landmark recommenced its operations on 23rd June after the Covid-19 lockdown with a corporate event for CEOs. The event organized by the Sri Lanka Institute of Marketing (SLIM) under it’s “Restart Sri Lanka” initiative, a national programme to reengineer businesses facilitated by the globally renowned Omar Khan as guest speaker, was held at the Jasmine Hall accommodating 100 SLIM invitee CEOs from the corporate sector.

“BMICH has implemented nimble and responsive health safety plans including screening, checking temperatures of each individual prior to entering the BMICH premises, personal distancing with spaced seating, hand washing and sanitizing etc to ensure a health safety environment in consultation with health and other relevant authorities” said Sunil Dissanayake-Chief Executive-BMICH.

“As Sri Lanka restarts according to the new normal, BMICH ensures a safe environment for all our guests, visitors and staff by implementing a well supervised programme of measures. Our team is available to provide an overview of the health safety measures that have been implemented to our prospective clientele who wish to host their events at one of BMICH’s many excellent, state of the art venues” he added. 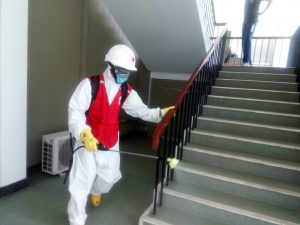 Sanitizing of the BMICH premises by Sri Lanka Red Cross

BMICH – Sri Lanka’s iconic landmark has implemented stringent health safety measures to ensure a health safety environment for its customers, visitors, exhibitors, staff and tenants when normalcy returns after a prolonged period of closure due to the Covid-19 pandemic. Nevertheless, BMICH operated the essential services during this period, for the essential services of the tenants.

“It is our primary responsibility to ensure the health safety of our customers, visitors and stakeholders when we are given the go-ahead to resume operations by the authorities. We have implemented all necessary health safety measures in consultation with the health authorities and are earnestly looking forward to welcoming our guests once again” said Sunil Dissanayake, Chief Executive-BMICH.

Trained staff will check the temperature of each visitor to BMICH premises upon arrival who will queue up with recommended personal distancing at designated entry points. Extensive facilities have been provided for washing and sanitizing of hands.

Another important aspect is spaced seating for the provision of personal distancing as required according to the Covid-19 guidelines. 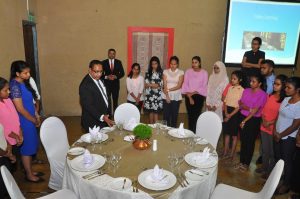 BMICH, Sri Lanka’s iconic landmark facilitated is programme on human resource management and personal etiquettes on 11th February 2020 for the 3rd and 4th year undergraduates following the HR degree at the University of Colombo. The CSR programme was organized and arranged on a request made by the Faculty of Management and Finance of the University of Colombo with the objective of enhancing the job readiness of the undergraduates.

“It is important that our undergraduates are made “job ready” with practical programmes conducted hand in hand by the Universities and leading corporate entities in order to engage them with the corporate world. We are delighted to have had the opportunity together with the Mount Lavinia Hotel to partner with the Faculty of Management and Finance of the University of Colombo in this endeavor” said Sunil Dissanayake – Chief Executive, BMICH.

The programme consisted of two sessions, the first being a lecture on the HR Supply Chain which was delivered by Sunil Dissanayake, Chief Executive, BMICH. The session was very interactive making it interesting while providing an opportunity for the undergraduates to get a clear understanding of the underlying concepts of the HR Supply Chain.

The next session was on “Table Etiquettes” which was conducted by Lakshman Dissanayake of the Mount Lavinia Hotel Catering Services (MLHCS), the exclusive Catering Partner of BMICH and touched upon the do’s and dont’s to be followed at a breakfast, lunch or dinner engagement which is important in personal as well as business life to portray a good image of oneself.