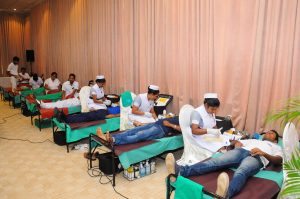 “Our Founders were not only committed to Sri Lanka but also to the world. It is our hope that our activities of merit will continue to honor them. Undoubtedly, this campaign will have a very real and direct impact on a large number of people who are in need” said Sunil Dissanayake, Director/CE of the BMICH.

Set in a sprawling site with 15 well laid out and spacious car parks that can accommodate 3000 vehicles at a given time and well maintained landscaped gardens, BMICH is Sri Lanka’s largest and Asia’s very first purpose-built convention center with ultra modern facilities. BMICH is situated in one of the most prestigious locations in Colombo. BMICH won the South Asian Travel Awards (SATA) in 2016, 2017 and Regional Gold Award in 2018 in Mumbai, India. Also won the Quality ERA Awards 2016 in Geneva and 2017 in Paris